We want to share some stories about the people who are buried in the Robertson family graveyard. It makes sense to start with James Washington Thomas Robertson, my great-grandfather. The death of his first wife was the impetus for founding the cemetery.

I try to imagine life on the eastern shore of Maryland in the mid-1800s. You worked on the farm you grew up on and when the time came you got married. You went to church, most likely Methodist. And you socialized with the people around you. 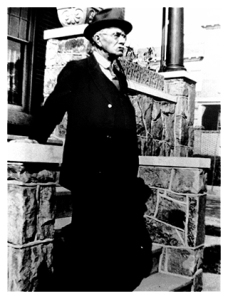 A widower who has to keep the farm operational — plant the crops, milk the cows, feed the chickens and the pigs every day — with 3 children aged 6, 4, and 2, has to find a helpmate and quick.

JWT’s second wife was my great grandmother, Caroline Lawson Catlin. She bore 2 children — Carlton Edward, my grandfather, and my great-aunt Esther. Caroline died in 1880 at the age of 29, 2 months after Esther’s birth.

So in all JWT had 10 children. We heard about the aunts growing up — Aunt Dula, Aunt Rachel, Aunt Eva. Aunt Ruby was a famous cook. I imagine that they all pitched in when their sister-in-law, my father’s mother, Mattie Hughes, died at age 51. My aunt Pauline was 25 then, but my dad and Aunt Carolyn were 16 and 11.

I remember meeting Aunt Esther. I know she lived on the farm where the Robertson family graveyard is located and we visited some time before she died and, I think, once after. The uncles were all dead long before I was born.

It was the death of JWT’s first wife Esther that led to the creation of the family graveyard. According to my father, Esther died in 1876 and JWT needed to find a place to bury her. She was buried on 13 April 1876 in an area on the family farm in Tyaskin.

JWT and his first and third wives are buried here, as are several of their issue.

We don’t have a lot of stories to tell about my great-grandfather, at least right now. I hope some will appear when we publish this. Someone might see this who has more stories to share. Others in the family tree have done a lot of research, and I benefit from that.

Tracking through the US Census records, we see that in 1860 at age 10, JWT lived with his parents and siblings in Tyaskin, Maryland. In 1880, the census records him living with his second wife, Caroline. In 1930, when he was 81, he was living with one of his daughters, Ruby, and her husband, Glenn Mezick.

We do have 2 different mentions of JWT’s having drilled a well in Salisbury. One is in the Salisbury newspaper from 1897 and the other, also from a local paper, has him drilling a well at age 81.

Mr. JWT Robertson of White Haven has driven an artesian well on the Court House Square. A flow of good water is now an attractive feature of the county green. The commissioners are likely to erect a canopy over the well and fit it with seats for the comfort of the public.

I might remember seeing a plaque to JWT Robertson in Salisbury but it’s kind of vague.