Part Two: Moving on Down the Road

Having had a pleasant and productive visit at the St. Mary’s Methodist Church in Tyaskin, we decided to try our luck finding 2 other family cemeteries — neither one associated with an established church.

Off we went in search of

But with little success this time. The area in which we were searching contained swamplands, dense forests, rivers and creeks and farmfields getting ready to be planted (with soy beans or corn, no doubt). We found no cemeteries, no headstones, no reserved plots of any kind. And not being enamored of the idea of wading in the water, so to speak, to search in more depth, we accepted our fate and moved on to the Robertson Cemetery on Clara Road, “our” cemetery.

We met Robert Randall Buller, caretaker extraordinaire, at the foot of a rather muddy access road, and he took us over to the cemetery in his truck.

This small plot of ground — home to 32 interees — is still a peaceful oasis of natural beauty, surrounded by 53 (or so) acres of soggy farmland.

Shiles Creek abuts the land and much of the area is very moist with poor drainage. The cemetery itself sits atop a small rise that gives one a bit of a view and protects the graves, at least for now, from becoming part of the wet land that surrounds it.

On the western edge of the cemetery are a series of graves marked Evans. They are separate from the rest of the folk in the graveyard, and we have no idea who they are or why they are buried there. Neighbors? Friends? Distant relations? It is a mystery.

After a lovely walk around the cemetery we asked Robert to join us for lunch at the Pemberton Coffeehouse back in Salisbury. Over lunch, Robert gave us some information on his family’s connection with the cemetery and the surrounding farmlands, and told us why he had decided to become caretaker, One Father’s Day he had gone to visit the grave of his father and found the whole cemetery in terrible shape, with vines so thick they even covered some of the tombstones. He decided then and there he would fix it all up — and we are so glad he did.

Robert also gave us a tremendous hint about the Hearn Catlin Cemetery we had failed to find that morning. It seems a friend of his (Hearn by name!) had discovered a small cemetery across from his house (which house had been in his family for many years). It was in the general area that we had been looking for the Hearn-Catlin Cemetery, and we think it must be the one we failed to find. Unfortunately we ran out of time (and energy) to try to visit again but Robert gave us Mr. Hearn’s telephone number and we may try to contact him later. What serendipity.

Surrounded by all these names and places from my father’s childhood, and mine, can’t help but bring back memories.

Our pilgrimage this morning brought us first to the old Rockawalkin Church (founded in 1839). My dad’s church (we think) and the site of Uncle Verner (we know) 80th birthday party.

Our second stop this day was at the graveyard surrounding St. Mary’s Episcopal Church in Tyaskin.

This modest churchyard is home to several members of the Hughes Family.

The St. Mary’s Churchyard is small and surrounds the church on three sides. It is a lovely place and well cared for.

Note: There is a discrepancy in Capt Jesse’s birth dates. His gravestone records his birthday as January 29, 1767. The Maryland Births and Deaths Index lists his birthday as February 28, 1768.

The Edward H. Nabb Research Center for Delmarva History and Culture at Salisbury University is a major resource library for the history and genealogy of the Eastern Shore. It is a beautifully appointed, state-of-the-art research center as well. Susan and I arrrived around 10:30 a.m. on Tuesday, ready to learn things.

Note: They take security seriously. No bags of any sort (even pocket books) allowed. There are lockers with combination locks available for all banned items. Also – no pens allowed. But there are nice red Nabb Center pencils available for free. You must sign in and out, and if you want internet access you need to supply a photo ID.

All this sounds rather formidable, but totally understandable given the wealth of information and knowledge you have free access to once inside. The staff is very friendly and eager to help — and incredibly expert at finding things.

We thought we had a clear idea of what to look at, but soon learned that we had been far too ambitious. And it is so easy to become overwhelmed. Hint: When the staff says “this particuliar resource is handwritten, dense, and hard to read,” you should listen.

We did have several successes:

Note: A very big thank you to the research assistant there whose willingness to help and broad expertise was key to these successes.

We are thinking of going back but tomorrow has been designated “cemetery grand tour” day.

Parsons Cemetery, right in Salisbury, began like many cemeteries in rural America — as a family burying ground, specifically on the Parsons 53-acre farm. Upon his death, Benjamin Parsons, who had no children, bequeathed his home and farm to St. Peter’s Episcopal Church for a cemetery. St. Peter’s accepted this generous gift and moved the folks currently resting in the church’s small graveyard to the more spacious Parsons field.

Today Parsons Cemetery is still an open and operating burial ground and it is the resting place for several of our “great” relatives.

Charles V. Hughes and his wife Mary, were Mattie White Hughes’ (our grandmother) mom and dad.

Also lying beside them are Verner Vane Hughes, Mattie’s brother, and his wife, also named Mary. We knew them as Uncle Verner and Aunt Mary. Uncle Verner’s son, Max, and his wife, Miriam, are located on the opposite side of the large Hughes headstone. We also knew them well.

The cemetery is large and well cared for by Cemetery Manager, Rusty Barnes — a friendly and knowledgeable gentleman who provided us with maps and helped us find the Hughes burial sites.

Here we are again in Salisbury, Maryland, in search of our roots — and many cemeteries.

This time we planned a three-part trip, with an initial stop in New York City to feed another passion – opera. Here are Mattie, Harry, and Fran with me (taking the picture) at the Met to see Don Giovanni.

And a second-leg trip to Columbia, Maryland, to visit good friends. While in Columbia we had dinner with Jill, our first cousin. It was really good seeing her and reminiscing about riding around in Delmar, DE when we were all (Mattie, Carlee, Susan, and Jill) teens – visiting all the hot spots. (Oh look – it’s Dagsboro!) 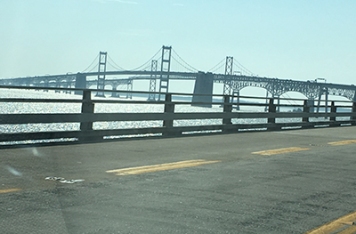 Now we are in residence in a loft apartment in downtown Salisbury, resting and chilling after our first cemetery walk. (See the next blog post for details on Parsons Cemetery.)

Traveling to Salisbury on Monday brought us across the Chespeake Bay Bridge – as stately and beautiful as ever — although beginning to show her age a bit, too. And then on into corn and soybean country. It is amazing to us how flat and rural the Eastern Shore of Maryland is. And how wet! So many rivers, inlets, waterways, and marshes.