Located on the west side of Sharps Point Rd., just south of Riverside Dr., NW of Fruitland in the Trappe District. A couple of the markers have fallen over, but this graveyard is in pretty good shape. Thanks to Joyce Fields Crouch and Rosalie Fields for their help in completing this listing!

We found this one using Google satellite view. It’s a little collection of graves by the side of the road in Fruitland. In general, this gravesite is not in bad condition, but the stones themselves are very hard to read.

I’ve since learned that some species of lichen might be protected so you have to be careful what you remove.

Henry and Sallie were our 3x-great grandparents. 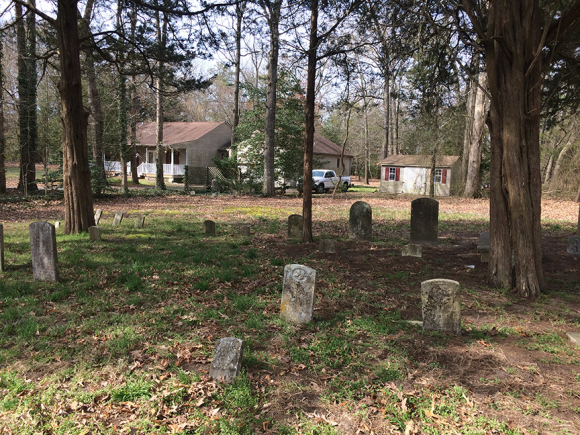 This cemetery is on the northern side of the Tyaskin area, closer to the Nanticoke than the Wicomico River, adjacent to the church.

Our ancestors interred here hail from the Hughes side of our parentage, our father’s mother — our 3x great-grandparents Caleb Hughes and Caleb’s wife Charlotte (Venables), and Caleb’s father Capt. Jesse Hughes.

Turns out the Sarah buried here is Jesse’s second wife (of 3), Sarah Harmonson Waters. His first wife, from whom we are descended, was Sarah McClester, who died in 1800. Her gravesite is unknown, according to Find a Grave.

Update: However, the Wicomico Cemeteries project places Sarah Hughes at the Mcclester – Evans Family Graveyard, which they said was overgrown with ivy, in the 1990s.

Died Jan 3rd, 1869
Aged 82 years
My father here lies underground
The dearest friend I ever found
But through the Lord’s unbounded love
We’ll meet again in realms above.

Died Dec 23, 1868
Age 75
Whilst in this tomb my mother lies
Her spirit rests above
In realms of bliss it never dies
But knows a Saviour’s love.

Part Two: Moving on Down the Road

Having had a pleasant and productive visit at the St. Mary’s Methodist Church in Tyaskin, we decided to try our luck finding 2 other family cemeteries — neither one associated with an established church.

Off we went in search of

But with little success this time. The area in which we were searching contained swamplands, dense forests, rivers and creeks and farmfields getting ready to be planted (with soy beans or corn, no doubt). We found no cemeteries, no headstones, no reserved plots of any kind. And not being enamored of the idea of wading in the water, so to speak, to search in more depth, we accepted our fate and moved on to the Robertson Cemetery on Clara Road, “our” cemetery.

We met Robert Randall Buller, caretaker extraordinaire, at the foot of a rather muddy access road, and he took us over to the cemetery in his truck.

This small plot of ground — home to 32 interees — is still a peaceful oasis of natural beauty, surrounded by 53 (or so) acres of soggy farmland.

Shiles Creek abuts the land and much of the area is very moist with poor drainage. The cemetery itself sits atop a small rise that gives one a bit of a view and protects the graves, at least for now, from becoming part of the wet land that surrounds it.

On the western edge of the cemetery are a series of graves marked Evans. They are separate from the rest of the folk in the graveyard, and we have no idea who they are or why they are buried there. Neighbors? Friends? Distant relations? It is a mystery.

After a lovely walk around the cemetery we asked Robert to join us for lunch at the Pemberton Coffeehouse back in Salisbury. Over lunch, Robert gave us some information on his family’s connection with the cemetery and the surrounding farmlands, and told us why he had decided to become caretaker, One Father’s Day he had gone to visit the grave of his father and found the whole cemetery in terrible shape, with vines so thick they even covered some of the tombstones. He decided then and there he would fix it all up — and we are so glad he did.

Robert also gave us a tremendous hint about the Hearn Catlin Cemetery we had failed to find that morning. It seems a friend of his (Hearn by name!) had discovered a small cemetery across from his house (which house had been in his family for many years). It was in the general area that we had been looking for the Hearn-Catlin Cemetery, and we think it must be the one we failed to find. Unfortunately we ran out of time (and energy) to try to visit again but Robert gave us Mr. Hearn’s telephone number and we may try to contact him later. What serendipity.

Parsons Cemetery, right in Salisbury, began like many cemeteries in rural America — as a family burying ground, specifically on the Parsons 53-acre farm. Upon his death, Benjamin Parsons, who had no children, bequeathed his home and farm to St. Peter’s Episcopal Church for a cemetery. St. Peter’s accepted this generous gift and moved the folks currently resting in the church’s small graveyard to the more spacious Parsons field.

Today Parsons Cemetery is still an open and operating burial ground and it is the resting place for several of our “great” relatives.

Charles V. Hughes and his wife Mary, were Mattie White Hughes’ (our grandmother) mom and dad.

Also lying beside them are Verner Vane Hughes, Mattie’s brother, and his wife, also named Mary. We knew them as Uncle Verner and Aunt Mary. Uncle Verner’s son, Max, and his wife, Miriam, are located on the opposite side of the large Hughes headstone. We also knew them well.

The cemetery is large and well cared for by Cemetery Manager, Rusty Barnes — a friendly and knowledgeable gentleman who provided us with maps and helped us find the Hughes burial sites.